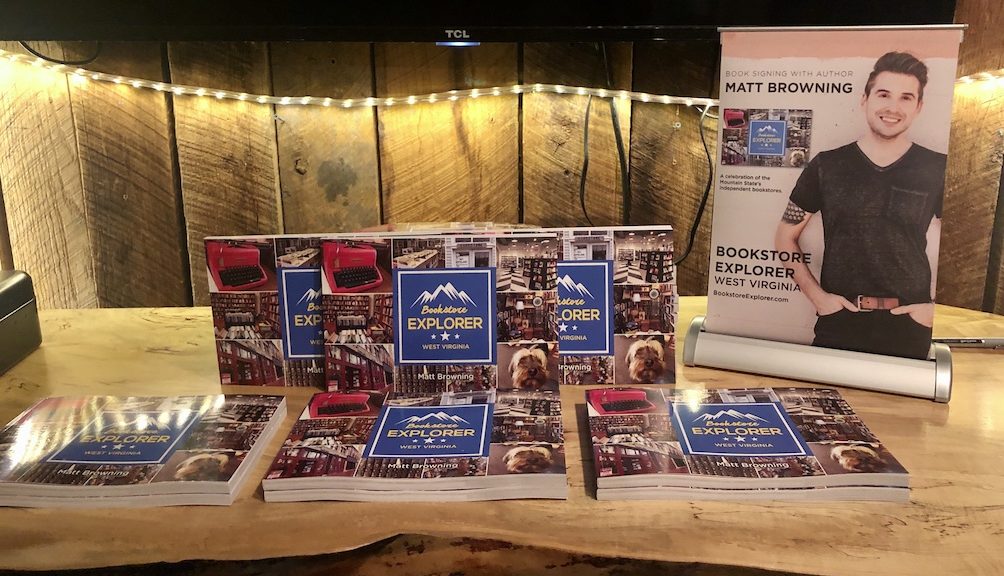 In December, I had the pleasure of hosting my first-ever book launch party. After years of aspiring to be a published author, I’ll admit to plenty of daydreaming about what a book launch party would look like. I envisioned my friends gathered around my local independent bookshop, sipping wine and eating finger foods, while I regaled them with stories about the process of writing my novel.

Things didn’t quite happen in that manner exactly, but I did have a very successful (perhaps more than I’d hoped) party. First of all, my “novel” ended up being a regional travel guide of sorts about my home state’s independent bookstores. Secondly, the book released when I was smack in the middle of a creative residency program a decent distance from my home city (and that aforementioned local indie bookstore). So I had, I presumed, two options: postpone a launch until a month later, when I was back to reality, or forego a book launch party altogether.

Fortunately, the decision was made for me thanks to a chance meeting and my love of a good cocktail. My second night at the residency, I ventured out to the local pub, where I struck up a conversation with some folks about the book, one of whom began texting as I talked. Moments later, a local music and arts event venue had agreed to host a launch party for me! (Mind you, the town – Fayetteville, West Virginia – is very arts-focused and supportive of the creative residency program I was there for, so that was certainly a factor.)

Now, I’ve read several “How to Throw a Book Launch Party” blogs over the years, and they tend to offer variations on the same advice. I’ve plucked a few tidbits that I found most pertinent and will share how they helped me host a successful event.

Obvious, no? As I said, my local indie was my venue of choice, but I wasn’t local at the time! Luckily, the venue was chosen for me. It wasn’t a bookstore, but a cool, popular event space that hosts live music, art shows, and other activities. So there was a built-in stage area, A/V equipment, plenty of local cred, and a track record of well-attended and well-hosted events, including book-related ones. So, if you don’t have a local indie bookshop, venture outside what might be considered the norm and see what else your town has to offer – an event space, a bar, a coffee shop, your friend’s cool literary-themed lounge…whatever works.

2. Harness the power of media.

Traditional and social, that is. Spreading the word is, again, obvious. Set up a Facebook event page and share the hell out of it. Look for writing-related social media pages/groups in your area and let them know. Ask your friends to share it. My venue luckily had a very active social media presence, and the town itself had a popular event-sharing Facebook page. Look for such things in your area. Also, don’t limit yourself to social media! I happen to work in marketing and communications in my day job, so I already have media contacts and the know-how to reach out to them. If you don’t, just google news release templates and write one up, then scour the websites of all your regional media outlets – TV, print, radio – and gather their email addresses. Send it out a couple weeks ahead of the event. Look online for community calendar websites and add it there, as well. You can always do follow-up calls as the event nears if you’d like. And print up some flyers and posters to hang around town. (Printing and, depending upon how professional you want them to look, design are costs to consider but necessary ones, in my opinion.)

Luck was in my favor here again. The venue was attached to a very popular local restaurant, so attendees had the option of ordering food from their menu, and the place served beer and wine. I did pick up some fruits and vegetables so people would have some snacks, but unbeknownst to me the venue and the lady whom I’d met at the bar had conspired to provide an impressive array of appetizers for the event. I wouldn’t suggest relying on such hospitality, so set aside some funds to pick up snacks. And that $3 wine from Aldi will certainly do if you’re buying in bulk on a budget!

I had boxes of the book in the back of my car, so this wasn’t an issue, but apparently some authors show up to events expecting no one and end up with a sizable crowd. I brought one box into the event, set some up for display, and kept the rest hidden until needed.

5. Decide on a structure and prepare to speak.

This was major for me. I’ve been to events where the author doesn’t say much at all and others where the author stands at a podium and gives a speech. Both are nice, but I wanted something a little more engaging and interactive. My favorite events are the “talk show” format style, where the author and an interviewer have a semi-structured conversation, followed by Q&A with the audience. So I reached out to a reporter friend to see if anyone at his station would be interested in doing the event with me. (It doesn’t have to be a member of the media, but I knew a reporter would be versed in conducting a good interview. Other writers, someone from the venue, even a chatty friend would work well here.) Luckily, one of the news anchors loved the book concept and volunteered. I prepared some suggested questions and got them to her, along with a gifted copy of the book, a few days in advance. We ended up having a fun, lively, and hopefully entertaining conversation. About 20 minutes was a good length. The venue’s A/V equipment and social media savviness (they Facebook Lived the event on their page) came in handy here.

The event was scheduled from 6 to 8 p.m. I knew I had friends driving in from home (an hour away), and I was told to operate on what locals call “Fayetteville time,” meaning people show up a half hour later than an event’s stated start time. So I made time on the front end of the structured portion to meet everyone and chat. This is a great way to meet the people who’ve come out to support your work and to relax yourself if there is a public speaking component that you’re dreading. (Writers are notorious introverts, after all.)

7. Say “thank you” a hundred times. And then some.

I was humbled by the support and effort extended to my event by the people of Fayetteville and everyone who had a hand in it. I still don’t feel like I’ve thanked them enough. (In fact, let’s do it one more time: Allison Taylor, Lewis Rinehart, Amy McLaughlin, Shawn Means, Kassie Simmons, everyone at The Grove, all the people of Fayetteville, and all my friends – old and new – who came out to show support: THANK YOU!) So yeah, profusive thanks is repetitive but these people went above and beyond. I’m sure you’ll have such supporters, too.

All in all, my book launch party could not have gone better. We had around 25 people attend, I sold 30+ books, and met so many amazing people. A lot of happenstance, luck, and neighborly goodwill went into my event, and I’m not sure I’ll ever be able to repeat it! But hopefully these tips will provide you with a case study and some usable blueprints for your own book launch party.

Writers: What are some of your book launch success stories (or challenges)? Share in the comments.

One thought on “How to Throw a Book Launch Party”