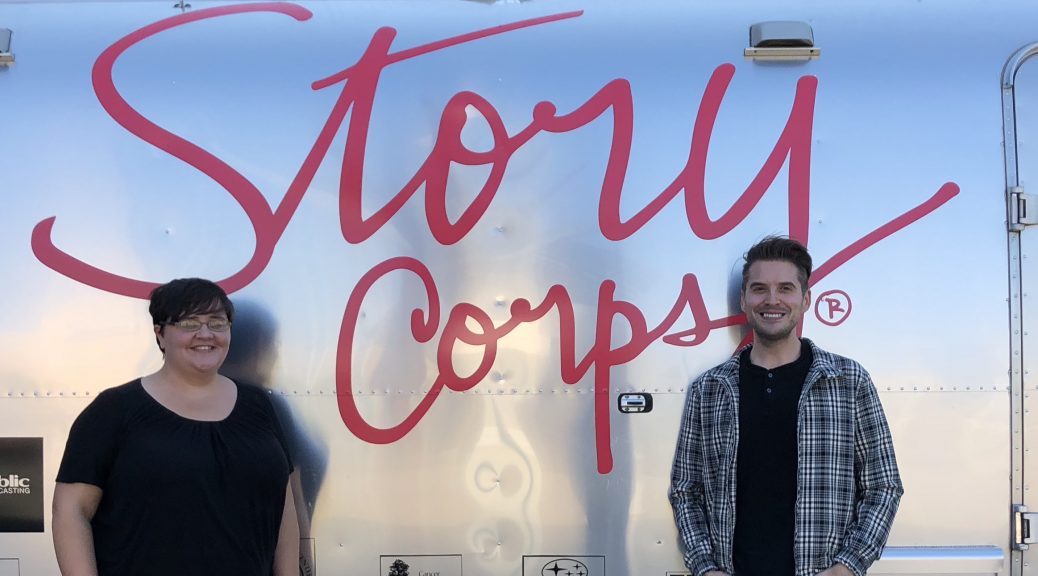 In September, I had the pleasure of stepping into an Airstream trailer in downtown Charleston with my friend, Tabitha Surface, microphones placed between us at a small table in a dimly lit booth with a silent facilitator in the corner watching over us, to record a conversation about being LGBT in Appalachia. It was part of StoryCorps, and it was truly moving. If you aren’t familiar with it, StoryCorps is a non-profit organization whose mission is to record, preserve and share the stories of Americans from all backgrounds and beliefs. One of the ways they do this is through a mobile unit, which parks itself in a city for a period of time and invites people to sign up for a recording session to talk about whatever they want to discuss. The recorded conversations are archived, with snippets of some of them aired on NPR.

When I heard through Fairness West Virginia that LGBT people were encouraged to share our stories during StoryCorp’s Charleston visit, I immediately signed up. I knew that Tabitha identifies as the “B” in LGBT and thought she’d be a great person to converse with – partly because she’s an extremely interesting person and partly because she and I fall into the “casual” friend category. We know one another primarily through our day jobs and have only infrequently socialized outside of that arena. Sometimes it’s easier to bare your soul to someone who doesn’t already know everything about you. Luckily, she was game.

What followed was a 40-minute conversation in which we began tearing down the proverbial walls. I shared stories that I’ve never shared before with close friends, let alone on the (literal) record. We discussed being LGBT in West Virginia, coming out, how Charleston has changed in terms of its acceptance, and what it’s like to be thirtysomething and single – among other things…some of which I still can’t believe I shared.

Below are a few of the more soul-baring excerpts from my part of the conversation.

On Being Gay in the Nineties…

Tabitha: When did you come out?

Me: 1999. So I was 19 years old, living in a very, very small coal town in the southern part of West Virginia. And, again, this was the 90s, right? So this was pre-Will and Grace…well, Will and Grace was maybe just getting started. Ellen came out when I was in high school, so she was around. But you just didn’t have the acceptance that you do today. So I was fearful for a lot of years and in complete denial about it. But it turned out okay. It wasn’t necessarily easy when I came out, but it wasn’t as bad as I thought.

Tabitha: You feel pretty accepted by your family now?

Me: Now, extremely. But back then…I grew up in a church-going family. My mom taught Sunday school. My dad was never much into church, but we went to church every Sunday. And I can’t point to times when I remember explicitly being told gay is wrong, but somehow that sort of bleeds into your psyche. So I always felt that being gay was weird and wrong, and you heard words like “queer” and “faggot” thrown around, and I was called those things as a kid growing up. So you build this wall around yourself. Deep down, I knew that’s maybe what I was, but I wasn’t ready to say it, even in my own head – if I even think it in my own head, then my goose is cooked, and that’s it, there’s no going back.

Me: Because they looked boyish?

Tabitha: Yeah, because people would totally know then that I was gay. I had a whole list of rules. My sister had a friend who dated a guy who was bisexual in high school, and I remember them talking about how disgusting it was, so I spent a lot of my life going, “No, you can’t do this. That’s not okay.”

On Boys’ Things and Girls’ Things…

I wanted to play with Barbie dolls, but I didn’t have little girls around me to have access to them, so I told my grandma that I wanted to play with them. We cooked up this scheme where we would go buy some and tell people they were for my cousin, who was a girl. I remember being in Kmart or Magic Mart or something – it was like 1986 or ‘87 – and she was buying them for me. And she tells the sales clerk that they were for me. I wanted to curl up in a ball and die. I was like, “No, they’re not. They’re not for me.” And even the sales clerk was like, “It’s okay. Boys play with this stuff, too.” But I was mortified. Looking back now as an adult, in hindsight, Granny was pretty progressive to have bought me that stuff. I wish I could’ve appreciated that. I wish she was still around so I could tell her, “Hey…thanks.” On Telling My Parents I’m Gay…

I sort of told my mom. I like cried to the point that she guessed what I was trying to tell her and just kind of said it for me. I think I remember saying, “I don’t want to be a disappointment to you.” And she said, “You wouldn’t be.” She also [jokingly] said, “We won’t be having any more boys spend the night!” Fair enough. I didn’t want to tell my dad. My dad’s not a harsh or abrasive guy, but he was a game warden. Hunted. Fished. Like I said, we lived in a little coal town. I was introducing things that they weren’t necessarily familiar with, so I didn’t want to tell Dad. So my mom told my dad for me.

Tabitha: Do you think that tendency to build walls has impacted other areas of your life?

Me: I don’t think there’s an area of my life it has not impacted. I’m an arm’s length from my cats sometimes! I mean, those walls went up when I was a teenager. My coping mechanism was writing. Instead of talking to people and talking to my family, I would just write it all down. You just build these walls around yourself where you’re sort of living in solitude. My walls were literally my bedroom walls, and it’s hard to tear that down. I go back home now, and I revert to 15-year-old me in a sense. I still don’t tell my family a whole lot of things that go on.

Those are only a few excerpts from a longer, deeper, and quite cathartic conversation. You can listen to the full discussion here.

It was nothing but a pleasurable experience – one that surprised me, I think surprised Tabitha although I won’t attempt to speak for her, and one that, on the whole, surprised our facilitator, Madison Mullen. I spoke to Madison at a wrap-up celebration and asked her how she felt about her time in the Mountain State – specifically the number of LGBT contributors to the project.

“I think that my experience has largely been witnessing a lot of stereotypes being broken,” she said. “I’m not from West Virginia, and I’ve never been here, but everything I’ve heard about – especially following the 2016 election – was portraying Appalachia and West Virginia in a particular way. I was completely overwhelmed and also shocked at the representation from the LGBT community. Not only in their forward-thinkingness and their reflections on what it means to be gay or different at all in Charleston, but also a lot of folks from the community talked about issues of acceptance as well. I think that, for the community to have this archive, is going to be really meaningful.”

I agree. At the end of Tabitha’s and my discussion, I said to her, “I feel like I know you so much better. I even feel like I know myself a little bit better.” And that is a powerful thing.

If StoryCorps ever comes to your town, find a friend, loved one, acquaintance, even a stranger, and go.