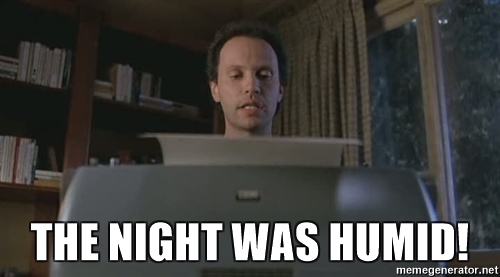 Pity, party of one. I’ve been in one hell of a terrible slump for probably a year or more, trying and failing to pump some life into a lagging writing career. I’m happy to report that I’m emerging from it, but it’s been a rather dreary time. I thought I’d share a little about why I’ve been feeling this way. Perhaps it’ll help other writers trying to dig their way out of the hole.

My slump came to a head very recently when two things happened in the same day. First, I caught the 1987 film “Throw Momma from the Train” with Billy Crystal, Danny DeVito, and Anne Ramsey. I hadn’t seen it in 30 years and remembered very little about it, like the fact that Billy Crystal’s character is a novelist experiencing writer’s block. I identified immediately with the fact that he couldn’t even finish the first line of his novel. The night was…humid? Moist? Hot? Luckily, the titular Momma came to Billy’s rescue eventually:

I feel ya, Momma. Anyway, later that evening, I attended an event at which I met several people for the first time. With such introductions comes the inevitable question, “What do you do?” I typically respond with an explanation about my day job in higher education marketing. It’s provided for me a rather successful career, after all. And it pays the bills. But it isn’t how I want to answer the question.

I want to lead with, “I’m a writer.” Sometimes I do. I try. I even jokingly offer the same explanation I’m offering here – that I want to say I’m a writer first, a marketing person second. But it still feels not quite right. And why? I know I’m a writer. I know the simple act of writing makes me a writer. Not a book on shelves. Still, though, I sometimes hear that nagging voice in my head asking, “Am I even a writer?” Why do I do this?

Here are a few reasons – the ones that have been nagging me the most lately.

So these things, when replayed over and over in your head, can really wear down your energy to work. To create. To produce. Put that together with a busy day job, other responsibilities, social and family commitments, gym time, all the excellent TV there is to watch and books there are to read! (Don’t even ask me what a ‘date’ is. I’m not sure I’d remember.) Suddenly an entire year has gone by, you’ve barely accomplished anything, and you’re no closer to your goal of being a writer than you were five years ago. Well, an income-generating writer with a product to peddle, I should clarify.

As I said, I am emerging from this drudgery. I’m back to work on one of those unfinished manuscripts and playing with those rewrite ideas. I’m polishing up this website a bit and reviving my social media presence. I even got a big-ass tattoo on my arm of an antique typewriter that I’m treating like my own version of Tony Stark’s Iron Man life force heart thingy. Things are looking up.

But I’ll elaborate on all that soon enough. In the meantime, if you’re a writer (or especially if you’re beginning to think you aren’t one anymore), how do you overcome the low points, the valleys in which you’re riddled with self-doubt and inactivity? Share in the comments!